As part of something I want to do for the blog throughout the NFL season, I will be selecting one play each week where I felt as though special movement was displayed. In the post I will then breakdown some things that I felt contributed to the movement performance. In my normal fashion, I will also be very likely to make note of things that maybe could’ve been done differently, as well.

Play: DeSean Jackson proves to be the human joystick this week 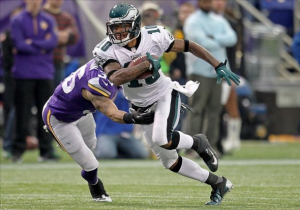 What makes this the BTS Play of the Week?

This week offered a wide variety of displays of movement excellence. First, MVP-hopeful Jamaal Charles had a number of big-time plays that could have landed him in this spot (that will happen when you house 5 balls in a given game). In addition, we nearly had our first defensive play make it to the tops of the totem pole when Captain Munnerlyn got himself a Pick-6 against the Jets. However, this week, the play that stood out the most occurred in a game that I was watching in live-time when Philadelphia Eagles dynamo, DeSean Jackson, started, stopped, and started again in his teammate’s typical fashion (his teammate I am referring to is LeSean McCoy). In fact, Vikings defensive end Jared Allen called McCoy “a human joystick” during an interview this past week. However, Jackson proved that the real movement joystick on the field this past Sunday was #10.

Though Jackson didn’t score on this particular play (he did have a receiving TD later to top of his big statistical day), the movement displayed on the play was more than impressive enough to earn this week’s nod as the top play of the week (as you will see when you watch it). The game was very chippy from nearly start to finish and much of this fire between the Eagles offense and the Vikings defense was ignited by Jackson’s passion, he did get the better of the Vikings for much of the day (though the Vikings won the game) and no time was this more evident than during this play. Now, many people know that I personally train and/or consult for a number of Minnesota Vikings throughout the year. Luckily for my fragile ego, I didn’t have any guys on the field at the time that the play occurred!

What happened movement-wise on the play?

The play begins in a 3rd and long situation. For most teams this automatically equates to a passing scenario but you never know what you’re going to get with this Chip Kelly operation. However, in this particular scenario, they line up with a shotgun formation and their star receiver in the Z-slot position to Quarterback, Nick Foles’s right. After the snap, Jackson takes a quick plyo/drop step to give him just enough time to let some pursuit occur up-field towards Foles while opening up some real estate for him in within the defense while his teammates run defenders downfield further. Jackson then crosses in front of the secondary and gives his QB plenty of space to put the football on him and allow one of the best open-field movers in the game the opportunity to do his thing (which he is about to do as well as you will see all season). The movement proficiency that has had to occur up to this point isn’t of prime importance as Jackson never had to, nor needed to; really turn things on until he got the football in his hands. This common misconception leads to many football trainers overdoing traditional linear speed work in track settings and guys who play in this type of slot position with these predominant roles rarely get to use that quality (of more biomechanically optimal acceleration mechanics formulated around the track) while instead relying on their inherent quickness and short-distance movement mechanics with a more upright torso.

At around the Eagle’s 48 yard line, things are about to get interesting. With an actively pursuing Marcus Sherels, Jackson decides he has to put on the burst slightly to give him the opportunity to at least get the angle on Sherels and pick up the first down. Notice he puts just enough gas to the acceleration pedal while still keeping full control of his body so he is able to maintain positioning in relation to what the defense is giving him around the boundary marker. One thing you should also notice here is that his mechanics aren’t calling for perfection right now in this scenario. He must keep his hands in tight and actively ready to deflect the Viking defender while again keeping his center of gravity higher. This slightly-submaximal speed movement is another trainable quality that is often not addressed enough in most speed & agility programs but used frequently during game-play. Jackson shows great control here however and this allows him to not only get past Sherels and get the first down but then set-up much more in front of him.

Like above, he continues to move in this submaximal speed (which for #10 is still faster than many of his opponents on the field at a given time) while quickly processing the pursuit angles and movement velocities of the defenders around him (notice his head moving slightly side to side as his eyes and brain processes). Between the Vikings’ 41-40 yard line, Jackson elects to execute a hopping jump-cut with quick upper body feinting to make the Viking defender begin to try and process what is going to happen next. This movement action is set up nicely and there aren’t many defensive players in the league who have the instinct to react quickly enough effectively under these circumstances. Jackson lands and immediately steps with his right leg into a high center-of-gravity lunge stop & cut which allows him to rapidly perform another short jump cut out of and away from the sideline. 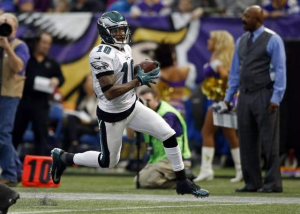 At the 37 yard line, Jackson again quickly processes the chaos of the environment around him while surveying the blocking situation of his own teammates while an upset Vikings safety comes crashing down. At this time (between the 36 and 35 yard line), Jackson throws his left foot hard into the ground to place himself into one of the nastiest deceleration lunge cuts that you will see during live action. Tactically this forces #34 to over-pursue past Jackson and technically allows #10 to position himself optimally for reacceleration after his plyo-step backwards out of the lunge stop (to be discussed in a moment). These two major cutting actions (the hop-stop jump cut earlier and the lunge cut here), which are responsible for a big chunk of the 51 yards attained, are due to Jackson’s tremendous eccentric force absorption qualities and his movement ability to put this specific motor potential to good use when it counts.

When he begins to take a step out of that stopping and redirection action, notice how quickly Jackson gets his body back into his acceleration mechanics and thus back to covering ground. #10 hits a high percentage of his maximum on-field speed in just a few short steps due to this type of specific action and intention. In this particular instance, it also allows him to have enough forward momentum to be just at the fingertips of the out-stretched arms of Blanton (another Vikings defender) who even had built-up speed working for him in pursuit behind DeSean. However, Jackson’s momentum was also enough to carry him with balance to the point where he is finally forced out by an angry Harrison Smith (if you have watched #22 play you will know he is often playing angry though).